Telephone was a revolution in communication in the early days of 1900. People could talk to each other over long distances. However, if they wanted to describe complex things like their garden, they had to say much more. Pictures and photos can cover such things instantly. The web is today’s revolution. It has become fast and its protocols can travel over many types of media. Its protocols can transfer voice and photos.
So I developed my WEB CAM.

It is based on a dsPic40F3013 processor that controls all subsystems. Among the others subsystems, it includes 2 Uart port, SPI 32KB ROM and 2KB RAM. Uart_1 is dedicated to Camera module and SPI is dedicated to WIZ810 module.
The photos are taken with a C328 JPEG compression module. The C328 module performs as a JPEG compressed still camera. The host can send a snapshot command in order to capture a full resolution single-frame still picture. The picture is then compressed by the JPEG engine (OV528) and transferred to the host
Each photo is divided in 64 bytes segments. The Wiz810 ehternet module is used to transmit these packets over the internet with UDP protocol.
Two standard servos are used to rotate the camera 180o horizontally and vertically.
I develope a windows based program to receive the packets. The programming language that was used is Microsoft Visual Basic 6, a simple and widespread language.
With this program the user can :
take a picture at resolution of 640x480 or 320x240

During development I took care to keep a low budget. All chips are made from Microchip. Schematics and PCBs are designed on Eagle 4. PBCs are single layer so anyone can use the Eagle’s evaluation version to reproduce them.
The same goes for the Firmware. The size of the basic firmware code is under 6K, so anyone can use the evaluation version of MikroC to alter the characteristics of the web camera to meet his needs. 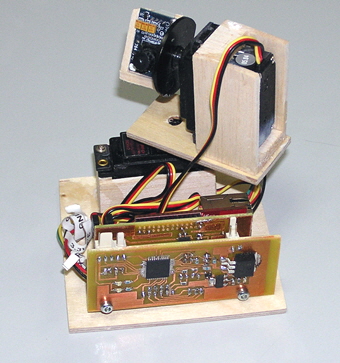 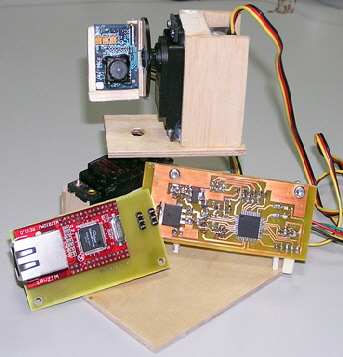 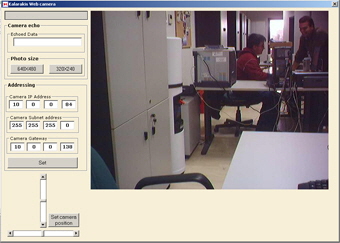